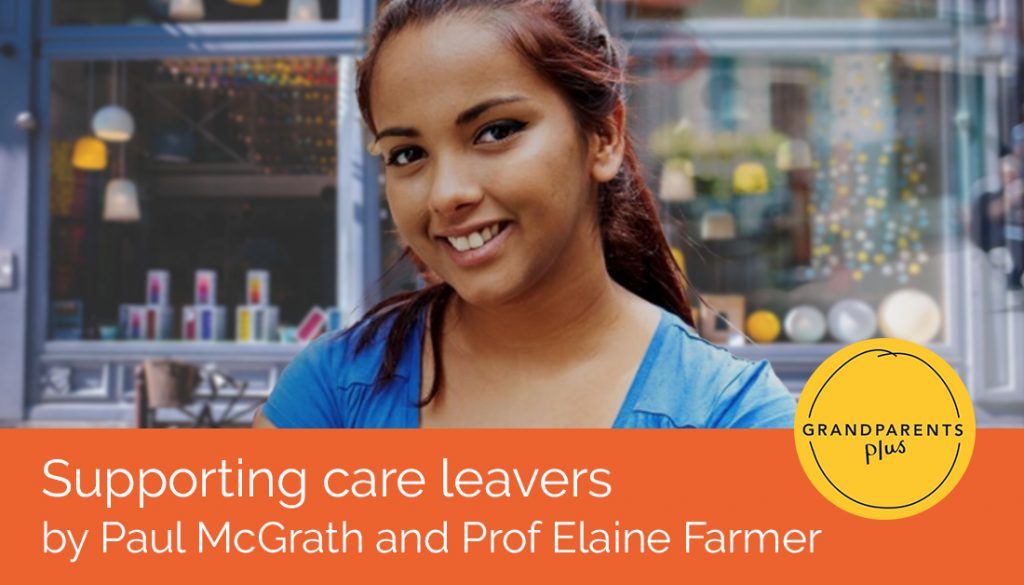 This article was written by Paul McGrath, Policy and Practice Advisor to Grandparents Plus and Professor Elaine Farmer, from the University of Bristol.

This year Grandparents Plus is supporting National Care Leavers’ Awareness Week 2020. We believe that all children who do not live with their parents should be supported to remain part of a family into adulthood. Whilst there have been improvements in enabling children in foster care to remain with their foster families, no such help has been provided for kinship families. We want to highlight the challenges facing young people turning 18 who are living with kinship carers (including special guardians), and also the challenges faced by  their carers.

Kinship carers have an essential role in helping the children and young people they care for manage the difficulties they face. They do this by providing the children with a safe family home, often until they become adults. However, kinship carers face a lot of difficulties themselves. They are generally older and in worse health than foster carers. They are much more likely to live in poverty and grandparents have often given up their jobs to take up the caring role which reduces their pension entitlement.

Kinship carers are also a lot less likely to receive support than foster carers. Many do not get financial support and talk about having to ‘fight’ just to get to speak to professionals about their children. Children in kinship care do not get the same level of help as children in foster care. Children in foster care are generally referred for additional help if they need it. However, although research has shown that children in kinship care have similar experiences and similar needs, they receive less help during childhood. Most children in kinship care are not entitled to support, such as that which comes with Pupil Premium Plus or Personal Education Plans at school. They struggle to get specialist CAMHS provision to help them with the emotional and mental health impact of their experiences and they are not entitled to yearly health assessments. Kinship carers often talk about the challenges they face carrying out ordinary parenting roles, such as applying for benefits for their children, applying for a passport, seeking medical treatment, or applying for a school place. They often have to tell their stories over and over again to justify to professionals why they are caring for the children.

The inequality in relation to support continues once the children turn 18 and become adults. At the age of 18, any court orders the children are subject to, such as special guardianship orders, expire. At this point, young people in kinship care are considered adults and are no longer entitled to any financial (or other) support from their local authorities. Despite this lack of support, research has shown that young adults generally continue to live with their kinship carers well after the age of 18, as is common in the general population. This has substantial benefits for these young people but can add to financial (and other) pressures on kinship carers, who may struggle to cope. Foster carers who look after young people after the age of 18 receive an allowance. No such provision exists for kinship carers.

Young people in foster care also receive help when they leave care in their transition to independence. No such help is offered to young people in kinship care. Recent research shows that a minority of young people move out of kinship care under the age of 18 and that these young people are very vulnerable. They often have severe emotional and behavioural difficulties and are at high risk of becoming NEET (not in education, training or employment). Even though many of these children have, at some point, been looked after by the local authority, leaving care services are not generally provided to help them.

In recent years there have been significant changes in post 18 support for young people in local authority care. These have been positive and allowed young people to remain living with foster families into their early adult years when many are still finding their way in the world, for example, when they start their first job or go into higher education. Grandparents Plus is calling for the same support to be made available for all kinship care families. Children in kinship care need their kinship families around them as they move into young adulthood. Their needs do not suddenly end when they reach their 18th birthday. Kinship carers need financial (and sometimes other support) to be able to continue to provide a family unit to these young adults. The impact of additional support would be enormously beneficial. It would allow kinship carers to support and care for their young people during the difficult early years of adulthood and enable them to remain part of a loving family. It would also help to give the young people the best chance of a successful transition into adulthood.

Our report Growing up in Kinship Care focuses on young people’s experiences into early adulthood.

Watch our film of young people speaking about their experiences growing up in kinship care.

Join our Kinship Community to receive articles like this direct to your inbox.