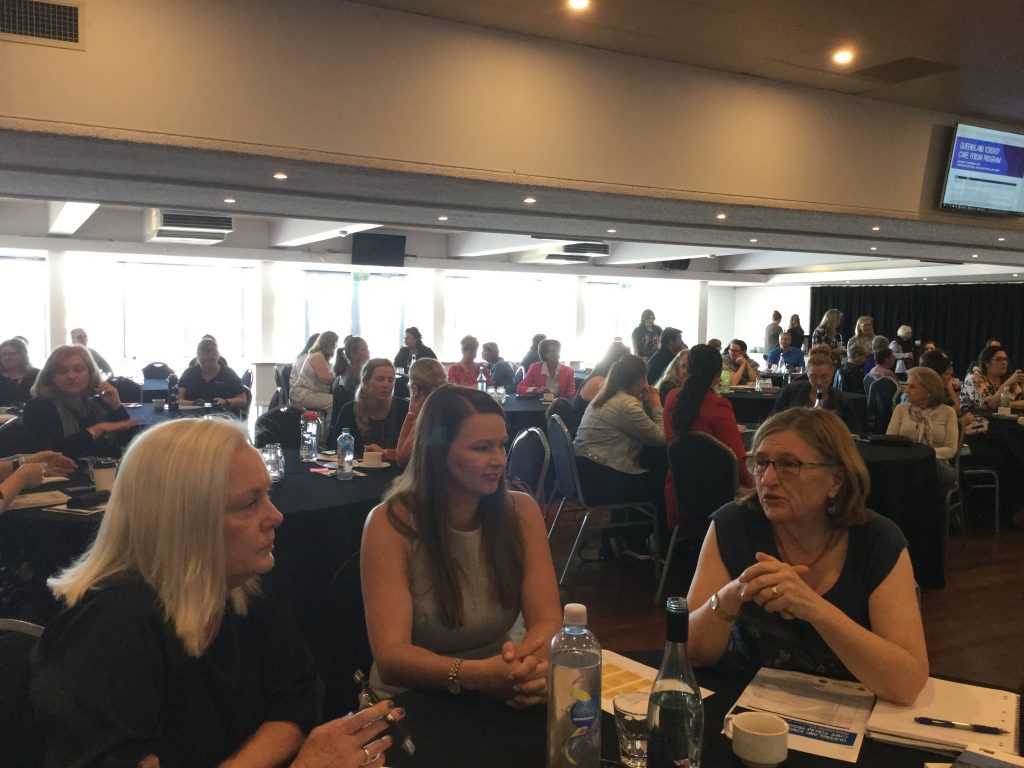 Queensland is a highlight of my trip. I’d travelled through the state with my family before starting work, and it was wonderful to be back for an all day workshop with around 100 people hosted by @PeakCareQld, the peak body for child protection services in the Queensland. It gave me the chance to spend time with a fantastic group of people who are leading the way in understanding and responding to the unique needs of young kinship carers, including Tracey.

Tracey is from Maroochydore on Queensland’s Sunshine Coast. She stepped in to raise her sister’s children when she was told they would go into foster care. She told me what happened:

‘I took on three young children within 24 hours. I was 27 years old. I quit my job the next day and told my partner that 3 kids would be living with us forever. I then jumped on Google and found nothing. I had three kids at my door with one suitcase and no-one to help. I’d never parented before.

‘The worst thing was the children came into the system through child safety services, but because I put myself forward I was classified as ‘minding them’ which meant their parents could come for them at any time.’

The children’s mother had another baby who was taken in by Tracey’s elder sister who was approved as a formal carer for the baby. The lack of fairness in the support offered was stark and Tracey’s savings were disappearing. Her relationship with her partner ended.

‘For 2 years, I was doing the circles, going back and forth trying to get help from child safety services until I went to my MP. I said I’m broke, I have nothing, what do I do?’

A year and a half later, with her MP’s support, child services open her case and she became a formal kinship carer.

‘It completely changed our lives. The children get the therapeutic services they needed but I couldn’t afford. I couldn’t work as no one would employ me because of the children’s needs. It’s not about the money, it’s about services and support we need for these children.’

Tracey’s experiences are like those of many kinship carers. You step up to do the right thing, but you and your children are invisible in a system that allocates support according to legal order, not the needs of the children and the family.

Sadly, it also highlights how becoming a kinship carer knocks younger kinship carers off track. They are likely to drop out of education and leave employment, relationships end and plans to have children are delayed, they are more likely to be renting and plans to buy a home are pushed aside. Many are desperate for support and advice – they say they have never parented before, let alone parented a child with complex needs.

In the UK, the Bristol Kinship Study by Dinithi Wijedasa (@dinithiwijedasa) is a critical source of data about the prevalence and characteristics of children in kinship care and their carers. Of 153,000 children living with relatives in kinship care in England, 51% are living with grandparents, 23% with siblings and 26% with other relatives. In Australia, there’s no reliable source of data and so there’s a real push to get a kinship care question into the census.

At the same time in Australia, kinship care is often framed as an issue affecting grandparents. For example, the federal government funds Grandparent Advisers who help kinship carers navigate the benefits system; some states, like Victoria and Western Australia, fund good programmes for kinship carers, but they are for ‘grandparent carers’. It’s easy to see why there are real and perceived barriers to young kinship carers who are looking for and trying to access support, information and advice.

I got to spend time with a small group of people who are doing something about the relative invisibility of young kinship carers (defined as aged 30 and under). The first step was research. Dr Meredith Kiraly, a researcher at Melbourne University, has published widely on kinship care, including the experiences of young kinship carers. The second step was a co-design workshop. Ten young kinship carers from across Australia came together for two days to work alongside Meredith and practice and programmes expert Jo Roff from Integrated Family and Youth Services in Queensland. None of the young kinship carers had ever met anyone else in their situation before. Their shared experiences created immediate bonds and they began to explore common challenges and to develop solutions.

Their insight is of immediate relevance to our work at Grandparents Plus. Our Kinship Connected project workers are working on the ground, delivering intensive support to carers in 15 local authority areas and developing peer support groups. The team are increasingly supporting younger kinship carers – in London, in Milton Keynes, in Yorkshire – and they are developing a deeper understanding about some of the unique challenges they face. People often say that becoming a kinship carer is life changing. It’s true, it’s just that it’s life changing in a different way depending on your stage of life.

What would help? Greater awareness, recognition and support for kinship care families generally, but also ensuring that services and support are inclusive, accessible and tailored where necessary. Knowing others in the same situation is key.

What’s next? Tracey’s now active in a Facebook group for young kinship carers and she’s working with Jo and Meredith to develop a pilot programme, with tailored information and support.

In October Grandparents Plus will host a workshop with Meredith and young kinship carers so we can share learning and ensure we do as much as we can to make sure their needs are understood and supported by us and wider policy and practice.

The three week trip is fully funded by The Creswick Foundation, and is a unique opportunity for experts from different sides of the world to share ideas and look at how to make change happen. The trip is being organised by the Association of Children’s Welfare Agencies. Lucy will be presenting at the Australian Social Policy Conference and the National Foster and Kinship Care Conference

If you have any questions for Lucy about the trip please contact comms@grandparentsplus.org.uk